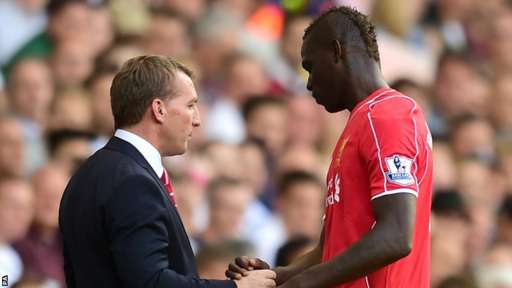 Summer signing Mario Balotelli has been dropped from the starting team by Liverpool manager Brendan Rodgers, who has decided to start with England international Rickie Lambert instead.

Lambert will be making his Premier League starting debut for the Reds.

Starting today as well for the home side are Adam Lallana, who gets the nod over Lazar Markovic, while Alberto Moreno keeps his place at left-back in place of Jose Enrique.

Captain Steven Gerrard and Jordan Henderson head the midfield with Raheem Sterling and Philippe Coutinho supporting Lambert in the attack.

Liverpool hope to bounce back from the 1-0 defeat suffered in Champions League against FC Basel in Switzerland on Wednesday.

Forward Daniel Sturridge has returned to training from a thigh/hamstring injury, but is still left out of the match-day squad.

Loanee Andre Wisdom is not eligible to face his parent club Liverpool, so Christian Gamboa makes his first Premier League start for West Brom in the only change to the team which defeated Burnley 4-0 last weekend.