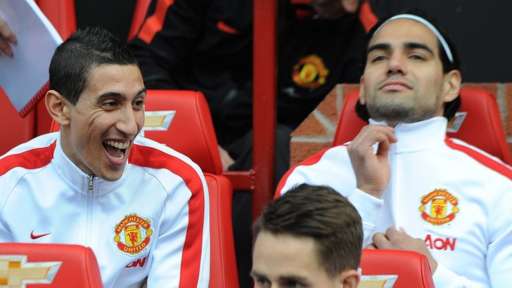 Di Maria and Falcao on the United bench

Manager Louis van Gaal makes one change to the Man United team that best Aston Villa 3-1 in the last outing, as Chris Smalling comes in for Marcos Rojo to partner Phil Jones in the heart of the defense.

This means that Angel di Maria and Radamel Falcao have to take their places on the bench again with Juan Mata, Wayne Rooney, Ander Herrera and Marouane Fellaini all keeping their places.

There is no Robin van Persie in the match day squad, despite declaring himself fit for this fixture, while Adnan Januzaj, who featured for the U21 squad in midweek is on the bench.

Manchester City in the meantime, make two changes from the team that lost at Crystal Palace the last time out, as Pablo Zabaleta replaces Bacary Sagna at right-back and James Milner comes in for forward Edin Dzeko, was ineffective in midweek.

Captain Vincent Kompany, who was doubtful for this contest with a hamstring problem, is fit and will start, but there is no place for January recruit Wilfried Bony, who remains out of the squad again because of an injury.

“Vincent Kompany is 100% fit, he has been fine for the past few days he has no problem,” Manchester City manager Manuel Pellegrini said.

“James Milner is always an important player for us, he can play in different positions. He was not 100% fit for the last game but now we hope he can see a more normal performance.

“We cannot put the season right with one performance. In this moment this game is for the fans, to be the team that dominates the city. We are fighting against United for the second, third and fourth places in the table.

“Both teams need to be at their best. It is always a close game.”

FROM THE STATS GURUS

Heading into this derby fixture, the stats have shown that hosts Manchester United have lost its last four Premier League outings against Manchester City and will be hoping to avoid losing five in a row for the first time in history.

Manchester City forward Sergio Aguero has not been in the best of form in recent weeks, but the Argentine international has scored four goals in his last three Premier League matchup against Manchester United and he is looking forward to the Old Trafford trip.