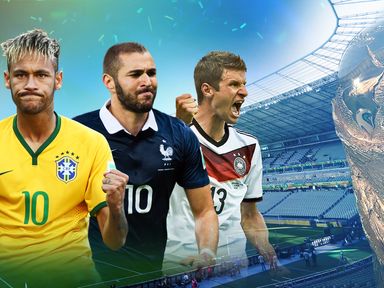 (SportingAlert) — The two opening FIFA World Cup quarter-finals will be on Friday as France take on Germany and Brazil setup a date with Colombia.

In the opening quarter-finals game at the Estádio Maracana, in Rio de Janeiro, European arch rivals Germany and France will battle for a place in the semi-finals.

Friday’s clash will be the 26th meeting between the sides, with France winning 11 of the previous 25 battles. Germany have won eight and the next six encounters finished in draws. The last time these teams met, France suffered a 2-1 defeat to Germany in February last year.

Three of these clashes have come at the World Cup. Germany won two (one on penalty kicks after a 3-3 draw), while France took the other game. A total of 83 goals have been scored in their 25 meetings, with Germany scoring 42 and France 41.

In team news, Germany defender Mats Hummels returns to training and could be available for the clash, but fellow defender Shkodran Mustafi has been ruled out of the rest of the World Cup because of a thigh injury. Germany coach Joachim Low also revealed that seven players of his squad were suffering from flu symptoms.

For France, leading forward Karim Benzema is expected to be the lone striker for the clash with Olivier Giroud, who started the last game, set to return to the bench in favour of Antoine Griezmann. Benzema has scored three goals and dished out two assists in four games so far.

Defender Mamadou Sakho is again available after he recovered from an injury.

In the second contest of the day, hosts Brazil will go up against a very exciting Colombia team at the Estadio Castelao, in Fortaleza. Brazil’s Neymar and Colombian playmaker James Rodriguez are expected to draw the major highlights when the whistle sounds for the kick-off.

Rodriguez, who has been one of the surprised standouts at the World Cup thus far, leads the scoring chart with five goals and two assists from four games and he is being backed to add to his tally against Brazil.

Brazil have been boosted by the fitness of star forward Neymar, who revealed that he is fully fit for the clash, after recovering from thigh and knee knocks against Chile in the round of 16 clash.

Neymar has scored four goals at this year’s tournament already.

Meanwhile, Brazil have won 15 of the previous 25 meetings between these two sides, with Colombia winning won two and eight ending in draws.

The matchup on Friday sees Colombia coming into the game unbeaten in their last 11 games and a quarter-finals victory on the day will see them improving to their longest winning streak run since going on a 27-game winning run between 1992 and 1994.

Brazil and Colombia, together have scored 66 goals between them (55 for Brazil), but the last four clashes between the sides have ended in draws, three of which, ended goalless.