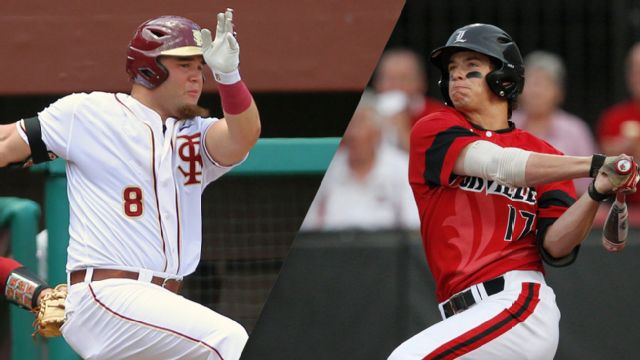 Friday’s game, which gets underway at 5 p.m. (CT), is the first game of the scheduled weekend matchup between the top two teams in the Atlantic Division. The showdown will continue on Saturday at 12 p.m., before concluding the series on Sunday at 12 p.m. as well.

Zack Burdi of the Louisville Cardinals in action

Florida State heads into the clash at Jim Patterson Stadium leading the all-time series 17-3 and leads 3-0 in Louisville, but visiting FSU coach Mike Martin, nevertheless, is bracing for a challenging road trip against these Cardinals, who have made the last two College World Series.

“We know that this weekend is one in which I would say is going to be the most challenging road trip that we’ve had in a while,” Martin said on the Seminoles’ official website.

The last time these two teams met in 1991, Louisville defeated FSU 9-0 in Tallahassee.

The Cardinals come into the weekend’s series holding a five-game advantage over the Seminoles in the race for the ACC title, with Clemson (13-13) sitting  in third, Notre Dame (12-12), at fourth and NC State (11-12), fifth, rounding out the Conference top five teams in the Atlantic Division.

****SERIES NOTES AND INFORMATION**** (From The Louisville Athletics Department)
• This weekend marks the first time in program history Louisville will host a Top 10 series.
• This will be just the second regular season series between two top 10 teams for the Cardinals. Last season, No. 10 Louisville took to the road for a series sweep at No. 7 Houston in the program’s first regular season top 10 series.
• The Cardinals have won 10 straight series against nationally ranked opponents.
• Louisville holds a five-game lead over FSU in the ACC Atlantic Division standings with six games remaining in conference play. The Cardinals need one head-to-head win against the Seminoles to clinch the Atlantic Division title and would also lockup the No.1 seed in the 2015 ACC Championship with a victory this weekend.

Also in action this weekend on ESPN3.com, Xavier against St. John’s, Charleston Southern vs. Radford and Stetson vs. Lipscomb.

No. 1 LSU will take on Missouri live on the SEC Network, so too will No. 23 Arkansas against Tennessee.

FRIDAY, MAY 8 SCHEDULE
****All Times In Central Standard***