Usain Bolt made easily work of his opponents in the 200m heat on Day 5 at Rio 2016. Bolt says he is not ready to predict his time as yet. 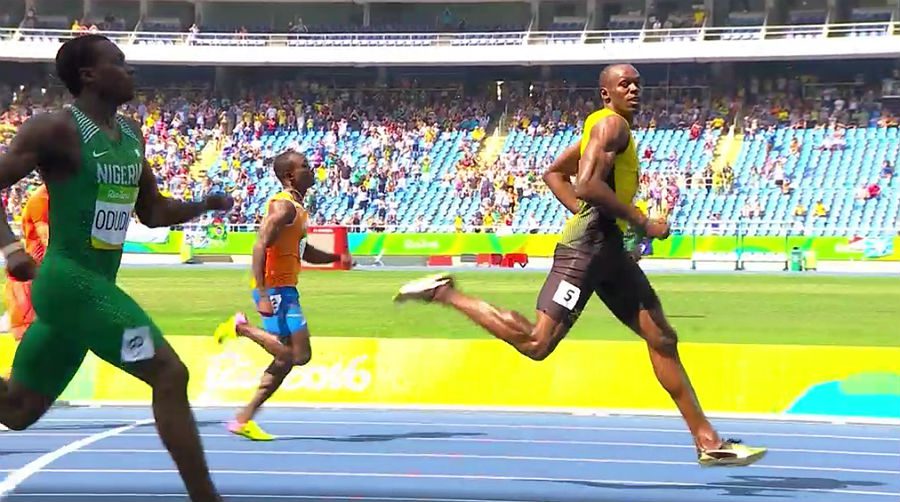 RIO DE JANEIRO, Brazil, Sporting Alert – Usain Bolt comfortably advanced to the semi-finals of the men’s 200m, after winning his heat effortlessly on Tuesday’s morning session on Day 5 of track and field competition at Rio 2016.

Bolt posted a time of 20.28 seconds to win Heat 9 of the event, easily beating Nigeria’s teenager Ejowvokoghene Oduduru, who ran a personal best of 20.34 for second place.

The world record holder won the Olympic Games 100m title on Sunday night and is bidding to become the first man in Olympic history to win a treble-treble.

In an interview after his race, the Jamaican speedster said he will wait until after he runs the semi-final to predict what kind of time he is capable of running in the final.

Canadian Andre De Grasse, the 100m bronze medallist from Sunday night, qualified the quickest in the half-lap with a comfortable time of 20.09secs.

Americans LaShawn Merritt and Justin Gatlin, the two fastest over the distance this year in that order, were easy heat winners on Tuesday as well.

Merritt, who won the bronze medal in the 400m Sunday night, finished first in heat 8 with a time of 20.15, the joint-fourth fastest on the day, while 100m silver medallist Gatlin ran 20.42 to take the fifth heat.

Five national records and a number of personal best and season best times were achieved in the heats.

TAYLOR AND CLAYE DOES IT AGAIN

Meanwhile, in field event action, Americans Christian Taylor and Will Claye repeated their 1-2 finish in the men’s triple jump from London 2012.

Taylor, the favourite heading into the competition opened with a massive mark of 17.86m and that was enough to defend his title, while Claye stretched out to a personal best of 17.76m in the first round as well for the silver.

“I wanted it so much,” Taylor said after the event. “It came together, the stars aligned.”

He added: “I wanted the world record but it wasn’t to be. I’ll keep pushing for it. It’s been there so long.”

He was delighted with his effort.

“It’s very special for me because it’s the Olympics,” said Dong. “I got my personal best which made me very happy.

“It’s a new landscape for me. I’ve improved so much since coming 10th at London.”

PERKOVIC HELD IT TOGETHER

Also in the field, Croatia’s defending Olympic champion Sandra Perkovic had just one mark, but it was more than enough to win the gold medal again in the women’s discus.

Perkovic started the competition with two fouls, but the champion held it together to toss a huge 69.21m in the third round to defend her crown.

Melina Robert-Michon of France was second with a new national record of 66.73m, while Cuba’s world champion Denia Caballero took the bronze with a 65.34m throw. Duke is unbeaten in three previous appearances in the Jimmy V Classic, having defeated Kentucky in East Rutherford, N.J., in both 1998 and 2001, and Florida in 2016 at MSG. WEMBLEY, Sporting Alert — The English Premier League Game of the Week turned out to be a one-sided affair after Tottenham sounded their title credentials with a 4-1 thumping of Liverpool at Wembley Stadium on Sunday. You can watch the 2021 Super Regionals series live streaming and radio coverage on ESPN, ESPN2, ESPNU and WatchESPN.com. Don’t miss it!