The game will see Golden State with the league’s No. 1 offense going up against Boston and it’s top-ranked defense.

This clash also will pit the Eastern Conference early leaders against the early Western Conference frontrunners, and while the season is still very young, many are viewing the matchup as perhaps a preview of the NBA Finals.

In the night’s other clash, Houston Rockets and the Phoenix Suns will take the Talking Stick Resort Arena at 10:30 pm.

Without a doubt, though, the focus of attention will be in the early game.

Since losing their opening two games of the campaign, Boston (13-2) has won 13 straight to distinguish itself as clearly one of the favored teams for the conference title this season.

However, Kyrie Irving and Co. will face their stiffest test of the season against the Warriors (11-3), who have won seven games in a row and 10 in the last 11 overall.

According to ESPN’s Basketball Power Index, Golden State has a 58.6 percent chance of winning the game, despite the uncertainty about Stephen Curry.

Curry (right thigh contusion) is still listed as probable for the game, but the star guard says he’s hopeful he’ll be able to play.

Paul has been out of action since his team’s opener on Oct. 17 with a bruised left knee, but he’s expected to return to the Rockets lineup against the Suns.

“There’s nothing like playing a game,” he told reporters, “so I’m excited about the process of it.”

The Atlanta Hawks beat the New York Knicks 108-107 on Monday to win five straight on the road and 11 in 13 games. The Knicks continue to struggle. 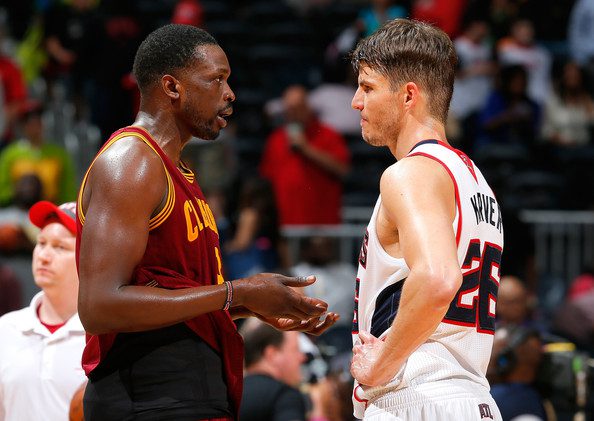 MIAMI (Sporting Alert) — Miami Heat have reached an agreement with forward Luol Deng, Yahoo Sports is reporting on Sunday. Miami, which loss LeBron James, who returned to the to Cleveland Cavaliers, is busy reshaping the team for the forthcoming season and the report said that Deng has agreed to a “two-year, $20 million deal.”

NEW YORK (Sporting Alert) — NBA standings, as well as the NBA scores, results and records, following the games that took place in the league on Monday night, Feb. 24.

LeBron James and the Cleveland Cavaliers are now just one more win away from advancing to the Eastern Conference finals after beating the Raptors to take 3-0 lead in the series.