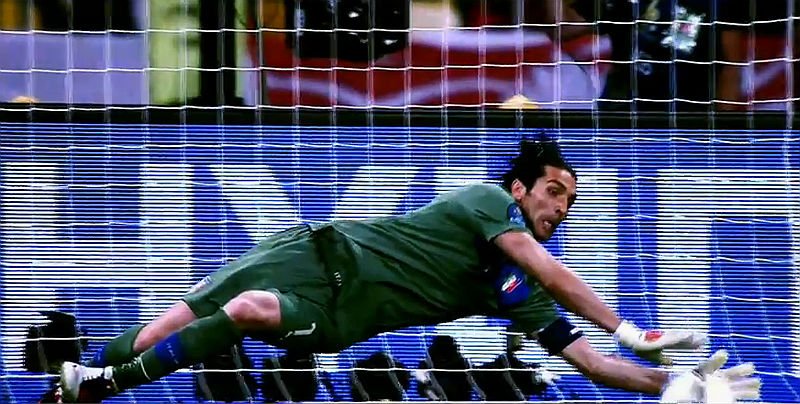 An embarrassing failed attempted clearance by goalkeeper Gianluigi Buffon allowed Vitolo to put Spain ahead in the 55th minute, but Italy collected the equaliser eight minutes from time.

A long ball over the top was poorly handled by Buffon, who completely bungled the ball with his side-footed tried clearance and it provided an easy passage for Vitolo to stir home.

Italy pushed on for an equalising goal after going behind and they were rewarded when Sergio Ramos fouled Éder in the penalty area.

After a delay, while referee Felix Brych discussed the incident with his assistant behind the goal, Italy was given the spot kick.

Daniele de Rossi stepped up to send Spain and Manchester United goalkeeper David de Gea the wrong way in the 82nd minute to knot the scores at 1-1.

Italy had the ball in the back of the net again, but the goal was ruled out after striker Ciro Immobile was caught offside.

The result saw Italy and Spain falling to second and third place respectively in the Group G standings, with Albania, which beat Liechtenstein 2-0 taking over at the top.

In a European World Cup Group I match, a first half hat-trick from Mario Mandzukic guided Croatia to a 6-0 victory over Kosovo.

Mandzukic netted in the 6, 24 and 35 minutes of the contest to set the pace, while Matej Mitrovic, Nikola Kalinic and Ivan Perisic completed the rout with second half goals.

In other World Cup qualifying scores, Ireland Republic tagged Georgia 1-0, Macedonia suffered a 2-1 defeat to Israel, Serbia battered Moldova 3-0, Iceland edged Finland 3-2, while Austria and Wales ended 2-2, so too did Turkey and Ukraine. GENEVA, Ohio – (Live Results) Briana Vander Woude of Dordt landed the first gold medal on Day 1 of the NAIA Men’s and Women’s Indoor Track and Field National Championships at the SPIRE Institute on Thursday. Action will be streamed live on the NAIA Network, the official video-streaming channel of the NAIA. Vander Woude led  from start to… (Sporting Alert) — The 2012 Penn Relays has started and several of the world’s top high school, college and professional athletes will be on show throughout this weekend. The meeting gets underway on Thursday with several preliminary races, including the high school’s 4x100m for girls, which will see several teams from Jamaica leading the way….