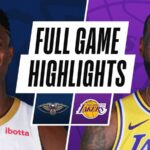 Williamson was returning to action for the Pelicans after he missed Wednesday’s game against the Clippers due to the NBA’s health and safety protocols.

The Pelicans (4-7) jumped all over the Lakers early to build a 28-14 lead late in the first quarter and then extended that advantage to 45-30 when Nickeil Alexander-Walker made a 23-foot three-point shot with 6:37 left in the first half.

A Marc Gasol basket with 5:48 to play in the third quarter put the LA Lakers ahead 71-70 and the home side built on the lead to cruise to a fifth consecutive victory in its return to play at Staples Center.

“We just settled in,” James said about the team’s rally following a 15-0 run late in the third quarter to start the break away.

The Lakers were playing at home for the first time after completing a perfect three-game trip on the road.

“That first game after a road trip is always kind of difficult, but we got some stops and got back to playing our kind of basketball,” James added.

Kentavious Caldwell-Pope hit four 3-pointers on his way to scoring 16 points, Montrezl Harrell made 8 of 10 shots and also scored 16 points as well with five rebounds in the win for the defending NBA champions.

Dennis Schroder ended with 12 points, while Kyle Kuzma finished with 11 points and a season-high 13 rebounds for Los Angeles, which shot 41.9% and made 15 shots from 3-pointers.

Lakers Defense Too Much For Pelicans

Brandon Ingram scored 17 of his 20 points in the first half against his former team for the Pelicans, while JJ Redick and Alexander-Walker each had 12 points for New Orleans, which was losing five straight.

“There was a lot I wasn’t happy with, but over the last 30 minutes of that game, they were the far better team,” New Orleans coach Stan Van Gundy said. “We played a good first 18 minutes, and then they turned up the defense and just dominated us at both ends after that.”

The Pelicans were without guard Lonzo Ball, who missed the game with knee tendinitis.