Columbus, OH – No. 5 Ohio State used balanced scoring to pull away from Nebraska on its way to securing a comfortable 52-17 win in BIG Ten opening play for both teams on Saturday. Watch Game Videos | Box Score

Nebraska jumped out to a quick 7-0 lead and came back to knot the score at 14-14 with 8:24 to play in the first half, but the Buckeyes outscored the Cornhuskers 28-3 in the second half to setup the win and start the season on a positive note.

It took Nebraska less than two-minutes to turn a four play and 75-yard first drive for a touchdown when Adrian Martinez run home from 10-yards.

But Ohio State answered with back-to-back scores when Justin Fields and Master Teague III rushed for touchdowns for a 14-7 lead. The visitors tied the game afterward, but fell apart afterward, following a number of turnovers and penalties – including two dismissals for questionable targeting.

Justin Fields went almost perfect on the day, completing 20 of his 21 passes for 276 yards and two touchdowns, while rushing for an additional 54 yards and a score. The Heisman Trophy finalist last season, completed his first 12 passes before throwing an incomplete pass in the end zone.

Garrett Wilson took seven catches for 129 yards and a touchdown, while Chris Olave had six catches for 104 yards before he was forced to leave the game, following a big hit in the second half.

Teague III ran for two scores and 48 yards, while Jack Miller III also ran for a touchdown and Jaxon Smith-Njigba took a spectacular catch for a score for the Buckeyes (1-0, 1-0 Big Ten), who started slowly, but dominated after dusting the rust off early and building momentum.

Ohio State: Faces No. 8 Penn State on the road. 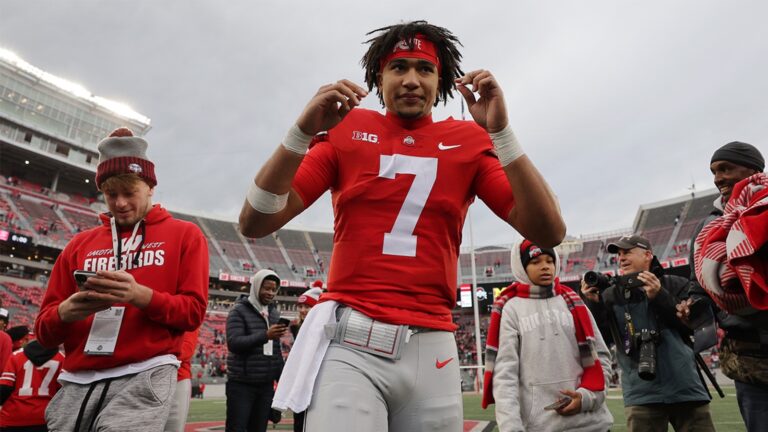 Watch ‘The Game’ between No. 2 Ohio State vs No. 5 Michigan on the FOX Network on Saturday, November 27 with live commentary throughout the matchup coming from Guss Johnson and Joel Klatt doing the call on the national broadcast with Jenny Taft (sideline).