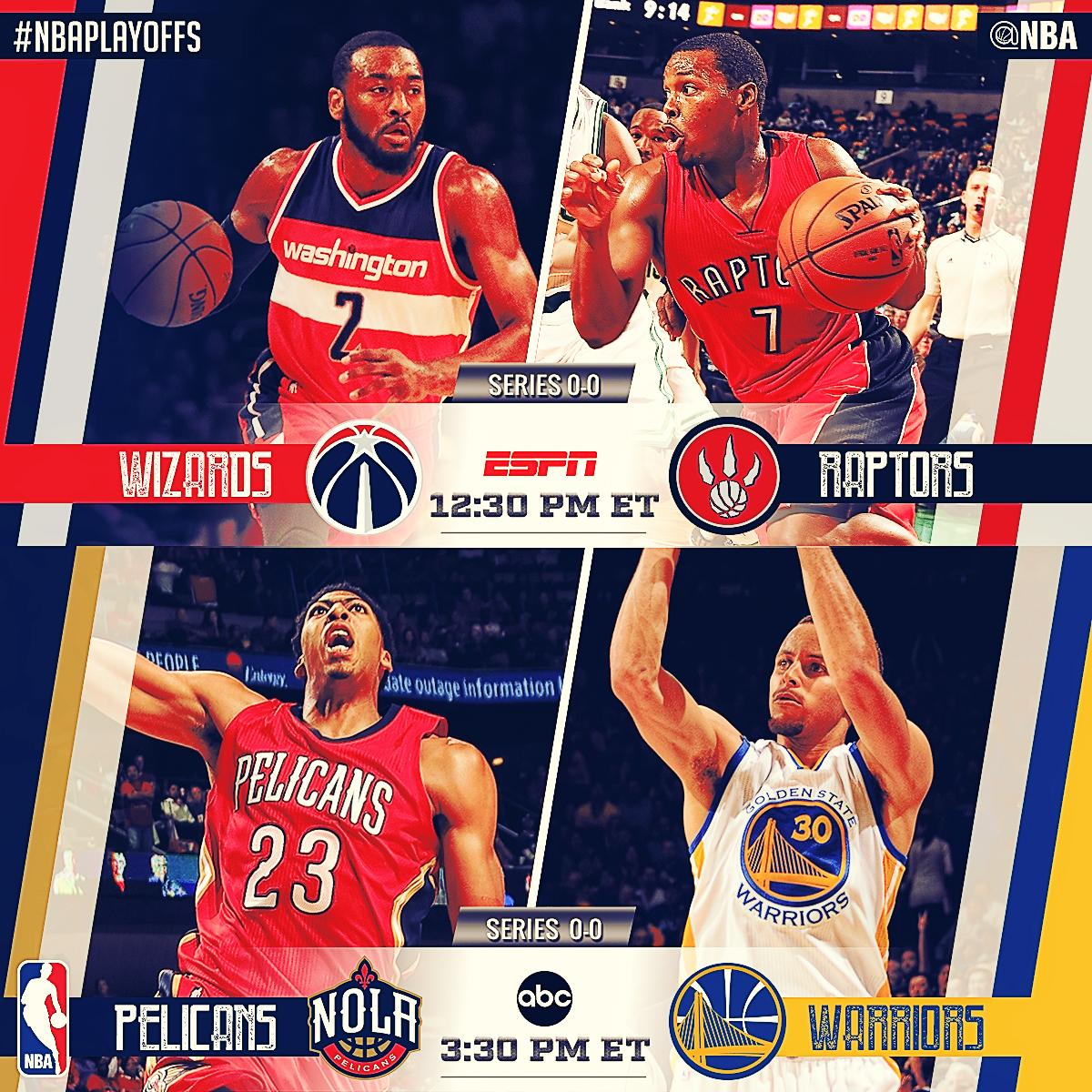 HOUSTON (Sporting Alert) — NBA playoff gets underway on Saturday, as action in the Eastern and Western Conference starts with respective first round Game 1 battles.

All four playoff games on Saturday will be streamed live on WatchESPN | Watch (1) Golden State Warriors vs. (8) New Orleans Pelicans Live on ESPN3

Kicking things off on Saturday, live on ESPN and the WatchESPN network at 11:30 AM CT, is the clash between the fourth-seeded Raptors and the No. 5 seeded Washington Wizards in Toronto, with three other games to follow.

No. 1 overall seed and Western Conference regular season top side Golden State Warriors start the hunt for its first NBA championship title since 1974-75 with a first round tie against the No. 8 seeded New Orleans Pelicans in Oakland.

The Warriors finished the season with a remarkable 67-15 record, the best in the league and it makes them the favourites among the bookies to go all the way.

Their impressive regular season performances and landmarks have opened the eyes of everyone, but the players believe it would be a failure if they don’t win the title after laying down such a fantastic foundation.

“This is what we’ve been waiting for,” said Stephen Curry, who is one of the leading candidates to win this year’s MVP title as well.

“Everything we’ve gone through to this point will hopefully prepare us for this journey of winning 16 games.”

Curry added in an interview with Yahoo Sports: “For the players, no one will be happy for anything less (than the NBA title).

“If we don’t win our last game this season it’s going to be a disappointing feeling, one where we felt like we fell short.”

His teammate Andrew Bogut is also heading to the Oracle Arena thinking the same.

“They (the fans) don’t care that we won 67 games,” Bogut said. “We don’t get an extra pat on the back before the series starts or anything like that.

“We get home court and that’s about it.”

At the other end, New Orleans, which edged out Oklahoma City for the eighth and final slot in the Western Conference, comes into this series with lesser expectations and star forward Anthony Davis believes it’s better this way.

The Pelicans (45-37), who defeated defending champions San Antonio Spurs on the last day of the regular season, are making their first postseason appearance since 2011.

“We’ve been in this situation the whole year. We’ve made it this far. We’re not looking to go home just yet.”

Raptors Look To Keep To Run

The Raptors (49-33) are in good form heading into the playoffs – winning four of the last five games overall.

They also held the advantage over the Wizards in the regular season, after dominating the series 3-0.

Toronto went out in the first round in the last game of seven to the Brooklyn Nets last season, but the players are confident about this term.

“This is the ultimate goal, to get to this point and build from here on out,” said Raptors guard DeMar DeRozan on Friday.

“Last year we got a chance to play against a great veteran team and learn. This time it’s time to keep making steps forward.

“We can’t make steps back, we’ve got to keep going forward and continue to get better.”

New recruited guard Lou Williams, who was not a member of the Raptors team in the last campaign is also backing the club to make a run in this year’s playoffs.

“There’s been a lot of talk about a deep playoff run and how guys felt about the ending in Game 7 last year,” Williams, who averaged 15.5 points per game during the regular season, said.

“It’s definitely something that’s been talked about and guys are prepared.”

The Wizards (46-36), meanwhile, ended the regular season with two overtime defeats, but star guards John Wall and Bradley Beal are confident the club will be ready for the playoffs.

“With the playoffs here, (regular season results) don’t matter,” said Beal heading into the knock-out round.

Washington dominated the Chicago Bulls in their first round clash last season before losing 4-2 to the Indiana Pacers in the conference semi-finals.

Meanwhile, there are two other games on the schedule for Saturday.

Rockets and Mavericks Battle In Texas

In the battle of the Texas giants, the second-seeded Houston Rockets will meet 7th-seed Dallas Mavericks in a Western Conference first round Game 1 matchup.

Another MVP leading candidate James Harden will lead the Rockets, but the supporting cast, which also includes Dwight Howard, Trevor Ariza and Josh Smith, are well placed to do some damage in this series.

The Mavericks have had a quiet season by their standard, but the supporters are hoping the likes of Rajon Rondo and Monta Ellis can start combining better, while Dirk Nowitzki and Tyson Chandler must show up in this series if Dallas is going to have any chance of upsetting the No. 2 seed.

The fourth playoff game on Saturday will see Derrick Rose and the Chicago Bulls (50-32) taking on the Milwaukee Bucks (41-41) in the Eastern Conference.

Chicago starts as the hot favourites to eased through this series after winning three of the four in the regular season series fixture with the Bucks.

But Tom Thibodeau men have won five of the last seven, including four in a row.