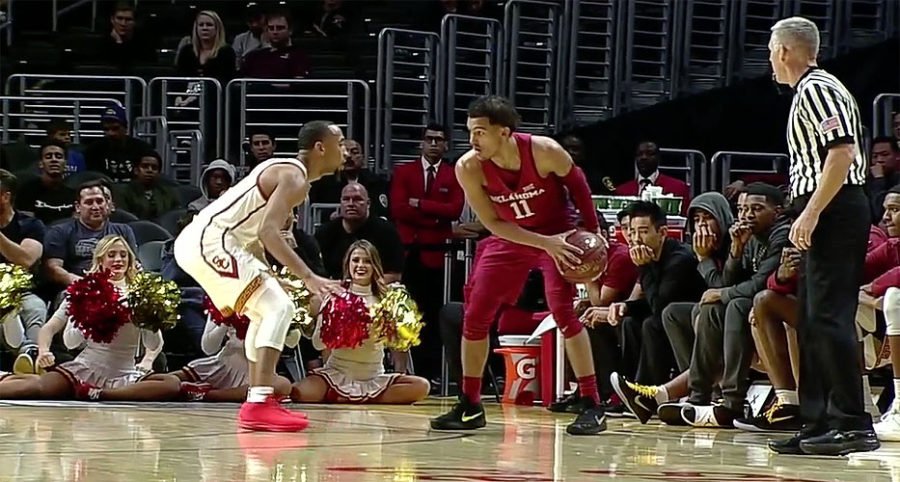 Trae Young of the Oklahoma Sooners

Young, who leads the nation in scoring this season, shot 9 of 18 from the floor as the Sooners (7-1) held off a late charge from the Trojans (4-3) to win five straight.

The freshman guard scored 20 of his total points in the first half, as he surpassed 28 points for the sixth straight game.

“Trae brings a skill that not a lot of people have,” Oklahoma coach Lon Kruger said.

“The players appreciate and recognize that and do a good job of playing off of him. You can run a lot of different things with the ball in Trey’s hands.”

Christian James added 19 points, matching his career-best with five 3-pointers along with five rebounds, while Brady Manek finished with 15 points for the Sooners (7-1), shot 45 percent and made 15 3-pointers.

“The last 5 minutes of the game I feel like is on me. We had a pretty big lead that I let the other team get back in the game.”

Elijah Stewart scored 23 points with seven 3-pointers for the Trojans (4-3), who never led and trailed by as many as 18 points early in the second half.

Jordan McLaughlin ended with 20 points and nine assists and Chimezie Metu grabbed a double-double with 13 points and 11 rebounds.

Bennie Boatwright had 10 points and nine rebounds and Nick Rakocevic chipped in with 10 points and eight boards for USC, which was losing its third straight game.

Trailing by 10 points at 81-71 with 1:40 remaining, the Trojans outscored the Sooners 12-4 to finish the game, but fell just short of their target.

“We fight all the way to the end,” Stewart said. “We had a good look going at the end.

“Half-court shots are always tough to make. It was right there for us, we just fell short.”

Oklahoma will be inactive until it visits No. 6 Wichita State on Dec. 16.

In the other two Hall of Fame Basketball Classic games played at Staples Center on Friday night, No. 20 TCU beat No. 22 Nevada, while No. 16 Arizona State defeated St. John’s.

Jaylen Fisher scored 20 points with six assists and Kenrich Williams added a double-double with 16 points and 11 rebounds in the 84-80 win over Nevada for the Horn Frogs, who won 10 straight and extended their nation’s-best winning streak to 15 games.

Cody Martin had a game-high 27 points with 11 rebounds, six assists and two steals to lead Nevada, with Jordan Caroline adding 21 points and 10 rebounds for the Wolf Pack (8-2).

Meanwhile, Romello White had 22 points and nine rebounds for the 16th-ranked Sun Devils (8-0) to stay undefeated after holding off St. John’s 82-70.

For Complete Box Scores, Vidoes and Other Highlights Click Here (Sporting Alert) — After an impressive victory over Long Beach State on Wednesday night, No. 2 Baylor go in search of another win the NIT Tournament against No. 3 Arizona State on Friday night. Brady Heslip scored 26 points in the one-sided 112-66 victory for the Bears (19-14) over the 49ers (19-14), in a game… ARLINGTON, Texas (Sporting Alert, Box Score) — Trey Burke nailed a jumper with 5.0 seconds left to send the game into overtime and then Michigan held on in overtime to stun No. 1 seed Kansas 87-85 in their sweet 16 NCAA March Madness game on Friday night. Burke, who scored all of his 23 points…