(Sporting Alert) — Romulo Eugenio Togni scored a fantastic free-kick with the last play of the game to give Pescara a 2-1 win over Catania and moved out of the relegation zone in the Italian Serie A Friday.

With the game destined for the draw, Pescara was awarded a free-kick just outside the penalty area and Togni expertly guided the resulting set-piece past Mariano Andujar  for the win at the Stadio Adriatico.

Earlier, Mervan Celik gave the home side a 23rd minute lead, but Catania pulled a goal back ten-minutes before the half-time whistle when Pablo Barrientos slotted past Mattia Perin to even things up.

Both teams had several chances to win the game, but it was Brazilian midfielder Togni and Pescara, who grabbed the late winner.

After the final whistle, Togni fell to the pitch in tears as he sees his team moved out of the relegation zone and up to 15th.

It was also a happy moment for Pescara boss Cristiano Bergodi, who raced up and down the pitch after the winning goal. 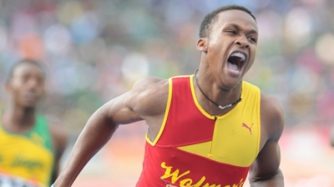 ROSEAU, Dominica (Sporting Alert) — West Indies have won the toss and will bat first in the opening Test match against Australia at Windsor Park in Roseau, Dominica, on Wednesday morning.

Lionel Messi showed once again why he is regarded as the best player in the world after scoring perhaps the goal of the year to give Barcelona the lead in the 2015 Copa del Rey Final against Athletic Bilbao on Saturday.

CHAPEL HILL, N.C. (Sporting Alert) — Zach Auguste scored 18 points, include hitting the go-ahead bucket with 1:08 remaining and Notre Dame held on for a 71-70 victory over North Carolina on the road on Monday night.

MADRID (Sporting Alert) — Real Madrid beat arch rivals Barcelona for the second time in five days to build up a massive morale-boost ahead of their Champions League clash with Manchester United at Old Trafford this week. And they did so without star forward Cristiano Ronaldo contribution to scoreline, as the Portugal international was left…