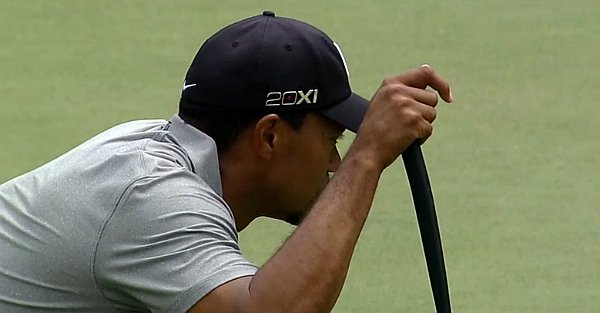 AUGUSTA (Sporting Alert) — Tiger Woods did what he had to do and is off to a solid start at the 2013 Masters at Augusta National on Thursday. The American isn’t in the lead nor did he putted as well as he wanted, but was totally happy with what is going at the moment.

Woods started the opening round with 2-under-70 and he said he was satisfied with the first day effort.

“I thought it was a good day, a solid day,” said Woods, whose girlfriend, the Olympic ski champion Lindsey Vonn, watched through out the day.

“I’m only four back and I’m there.

“I’m very pleased. It was a good, solid day. I hit the ball very solid and lag-putted pretty good and I made a few here and there.”

“A couple of putts, we were just talking about it in our group, that they weren’t that fast.”

Meanwhile, Sergio Garcia of Spain took the early lead at the Masters at the close of Day 1 with score a 6-under-66 to share the lead with Australian Marc Leishman.

But even though it was one of his best, Garcia though it could have been better.

“To tell you the truth, if I manage to make a couple of the putts that kind of stayed around the lip, I could have been probably 7- or 8-under par through 10,” he said.

Dustin Johnson at 5-under-67 is one-shot behind the leaders, while defending champion Bubba Watson, who struggled with the pace of the greens, is tied for 64th with a 75.

Meanwhile, Phil Mickelson, a three-time Masters champion is at 1-under-72, but had to fight to recover from a struggling start.

“They’re soft and they are slow, and consequently we have 45 people at par or better,” said Mickelson said.

“But that means I’ve got to change my whole mindset and just get after these pins, because the ball’s not running like it used to and I’m giving this course way too much respect because of my past knowledge.”