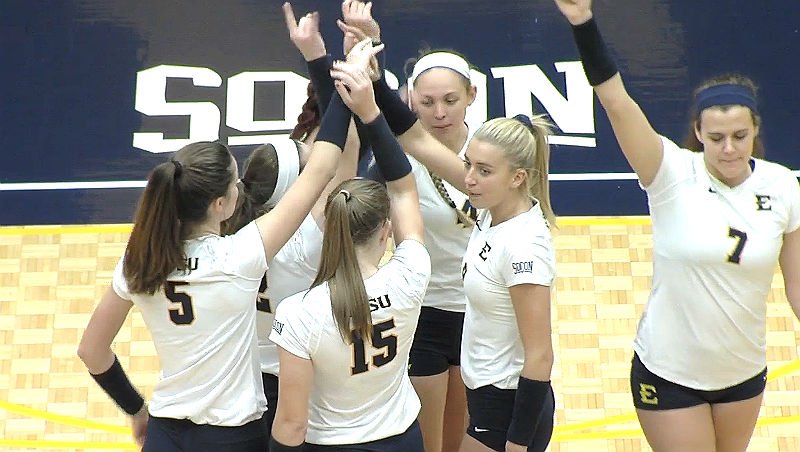 “I am proud for the program,” said head coach Lindsey Devine, who had to rally her team severals after losing the first set.

“These girls have worked extremely hard all season and we were very determined and had our four senior lead the way in saying that we are going to work hard in protecting our facility.”

Junior outside hitter Rylee Milhorn tallied a season-high 21 kills and 10 digs on the night to collect her team-leading sixth double-double of the season.

Senior Briana Allmon finished with 14 kills and eight digs, while Hailey Aguilar recorded a game-high 18 digs in the win for the Buccaneers, who avenge the 3-2 defeat at Furman on Sept. 23.

“They are strong young women and have represented this program all year with class,” added Devine.

“Our players are relentless and didn’t let the first set deter them in what their mission was tonight which was to be undefeated at home this season.”

The Bucs will now round out the regular season with a pair of road games at Citadel on Friday, Nov.11 and Mercer on Saturday, Nov.12.

Liverpool will tackle Huddersfield Town in the fourth pre-season game this summer and you can watch live stream on LFCTV and LFCTV GO.

(Sporting Alert) — New new summer signings Eden Hazard and Marko Marin were both in form and on target for Chelsea on tour of the United States on Wednesday night. Watch Chelsea beat Seattle Sounders 4-2 Video Highlights Both players, both this season to help push the Blues towards winning the Premier League and repeating…