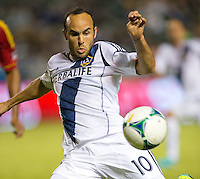 Landon Donovan among the 26

The training camp, which runs from Jan. 6-Feb. 1, is being used as part of the preparation for the 2014 World Cup tournament. The camp will start in Carson, California., on Jan. 6 and continue in Sao Paolo, Brazil, from Jan. 13-25.

The team will then return to the U.S. Soccer National Training Center for a final assessment, US Soccer announced on its website at www.ussoccer.com.

“We are all very excited for this camp because, as a team, it will give us our first taste of Brazil,” said Klinsmann. “This is a very important camp in our preparations for the World Cup.

“It’s important for the players to continue developing their bond and sense of urgency for the tournament.

“It’s important for us to see how they do in Brazil, how the new players fit with the group and to make sure everyone is focused on reaching the highest level for next summer.”