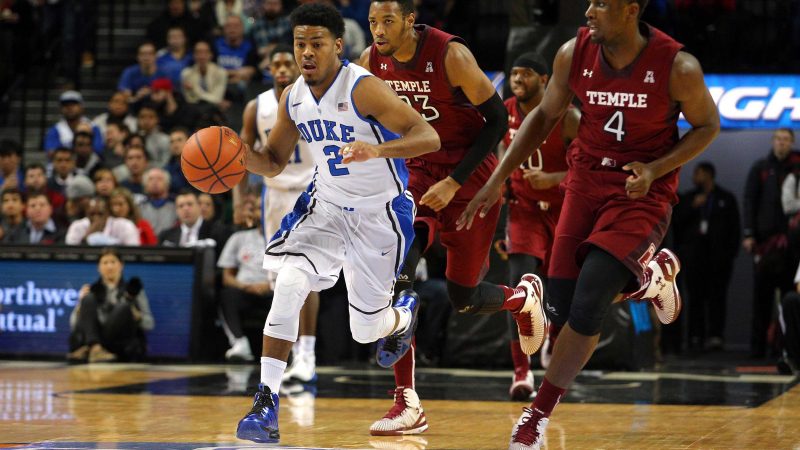 At the NRG Stadium in Houston, Texas, four starters scored in double figures to guide the Blue Devils (33-4) to a 66-52 win over Gonzaga, a result that saw coach Mike Krzyzewski sealing his 12th trip to the Final Four.

Justise Winslow and Matt Jones each scored 16 points for Duke, with the latter connecting on 4-for-7 from three points range and picked up three steals in the win for the ACC powerhouses.

Freshman point guard Tyus Jones added 15 points and six assists and senior Quinn Cook finished with 10 points and five rebounds for the No. 1 seeded Blue Devils, who won four in a row and 16 of the last 17 contests.

Jahlil Okafor was held to nine points, while pulling down eight boards for Duke.

As a team, Duke shot 84.2 percent from the free throw line on 16-for-19, while the second seeded Gonzaga only made nine trips to the charity line.

Krzyzewski’s men were also significantly better at handling the ball as they had just three turnovers all game, compared to Gonzaga’s 13.

Duke, the South Regional champion, now moves on to face Michigan State in the Final Four.

The No. 7 seeded Spartans continued their good tournament run with an overtime 76-70 win over No. 4 seed Louisville at Carrier Dome in New York, to lift the East Regional title.

“I’d like to tell you that I thought five different times this year that we were good enough to get to a Final Four, but I’d be lying to you,” said Michigan State coach Tom Izzo.

“But I think the burning desire to be in this Final Four, and they didn’t want to be a group that didn’t make it. I think it was more of the battle cry all year long.”

Travis Trice scored a game high 17 points to lead the way for the Big Ten outfits, who secured their fourth win a row.

Denzel Valentine added 15 points, seven rebounds and six assists for Michigan State (27-11) and Bryn Forbes scored 14 points off the bench, including five in overtime to help with the win, after both teams finished 65-65 at the end of regulation.

Montrezl Harrell paced Louisville with 16 points, nine rebounds and four assists, with Terry Rozier added 13 points, eight rebound and four steals in the defeat for the Cardinals, who trailed 40-32 at halftime.

Meanwhile, on Saturday No. 1 overall seed Kentucky battled to a close 68-66 win over third-seed Notre Dame to improved to 38-0 on the season.

Karl-Anthony Towns scored a game-high 25 points and the Wildcats knocked down key free throws late in the stretch for the win.

Kentucky will face another No. 1 seed Wisconsin in the Final Four after they won the West Regional with an 85-78 positive result over second seed Arizona.

The Final Four will be on Saturday April 4, in Indianapolis.

(Sporting Alert) — The United State men’s soccer team will take on Russia in an international friendly game at the Kuban Stadium in Krasnodar on Wednesday. Game is Live on ESPN2, ESPN3.com and Univision Deportes @ 10 a.m. ET. Forward Jozy Altidore returned the starting line-up after getting a recall to the side and will…

NASSAU, Bahamas (Sporting Alert) — The following is the medal count after day two of track and field action at the 2013 Carifta Games on Sunday at the Thomas A. Robinson National Stadium in Nassau, Bahamas.

SAO PAULO — Brazil has been drawn alongside Italy and Mexico in next year’s Confederations Cup, as the 2014 World Cup host look to give a preview of what is to come. Brazil, who has been drawn in Group A, will also play against Japan, a team they will face in the tournament opener. World champions Spain has been…