FORT LAUDERDALE, FL, Sporting Alert – The following are the NCAA college basketball top 25 scores and results from the games that took place on Sunday, Nov. 15.

CHAPEL HILL, N.C. — Nate Britt jumped off the bench to matched his career high with 17 points as No. 1 North Carolina used a steady flowing half to setup a 92-65 victory over Fairfield in college basketball action on Sunday.

Britt, who scored 15 points in the season-opening win against Temple on Friday, shot 6-of-9 from the field, including four 3-pointers, while dishing out five assists for the Tar Heels (2-0).

“Confidence does a lot of things for you. … But I think it’s more his work and the time that he’s put in.”

Brice Johnson had 16 points and 11 rebounds, while Joel Berry II added 15 points and four assists in the win for North Carolina, which made only 18 of its 32 attempts on a frustrating night from the free throw line.

“I’m concerned about the way we played today, but I’m not worried about our team,” Williams added.

Justin Jackson and Theo Pinson each scored 11 points, with the latter also finishing with eight assists for the Tar Heels, who are without preseason Atlantic Coast Conference co-player of the year Marcus Paige.

Paige will miss the first few weeks of the season because of a broken right hand.

MADISON, Wis. — Bronson Koenig poured in 23 points, and No. 17 Wisconsin bounced back from their season-opening defeat to Western Illinois with a 92-65 win over Siena in college basketball top 25 action on Sunday.

Vitto Brown added a career-high 16 points and seven boards and Nigel Hayes finished with 14 points in the win for the Badgers (1-1). 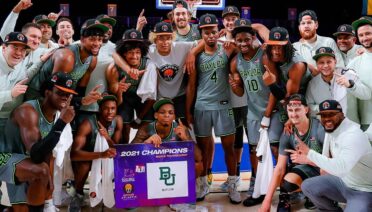